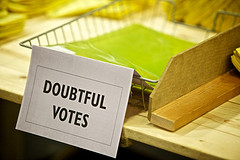 Reflecting over the past week – I realised the election news has been constantly being broadcast on all the news channels, we are constantly been updated on the polls from ICM, ComRes, Harris, Ipsos-Mori, Populus and YouGov in the bottom right-hand corner of the screen where it appears the Tories have held their lead.

Does these mean that the Tories may win the election. Since 1992 the polls have not been wrong.
Although this election is different – there are just too many variables that may influence the final result. The electorate are much more information & technically savvy. Back in 1997 brought about the increase in use of technology, which presented information to the electorate quicker and in a much more digestible form. Today we are constantly ‘spammed’ with information through the use of IT: Twitter, blogs, MySpace, RSS and lots more, not only at home but on our mobile devices (iPhone, Blackberry)  This has probably blurred the possibility of predicting the final results – even the technology available today helps us to undertake detailed tend analysis & web-visualisations of what’s going on.
It would be amazing if you could make sense out of the post and present data-sets that are available. By developing web-visualisations – you could visually illustrate the voting intentions of the electorate, then following segmentation analysis using key-election-topics, age, values, behaviours and motivations you’d be better placed to tailor your message to a particular constituency or region.
Several years ago, a couple of guys spent sometime investigating how leaders build value by building confidence in the future. Their findings established two electorate values: tangible, like  earnings and standard-of-living, and intangible value. Intangible value was of particular importance since if targeted right would win votes. Intangible value is based on the electorate’s perception of whether a political party is likely to keep its promises about future growth.
They saw a pattern in how leaders increased confidence in intangibles, in that, it directly influenced overall confidence. Starting with keeping their promises – being honest with integrity – followed by illustrating a compelling strategy for the future that presented  digestible plans – then ensuring achievable core competencies are planned in departments and organisation and finally that the numbers added up –  basically putting the money where the strategy is.
Relying on the polls for the final result has its own issues and may not be a guarantee of the final result. Just remember if you are campaigning for a particular political party – a portion of your constituency will always support you, where at the other end of the scale will never vote for you – but in the middle are swing voters – they’ll either place a tactical vote or may not even bother voting all. These are the voters you want, here’s to another week of election polling results and answers to the ‘intangibles’ as party manifestos are being released.