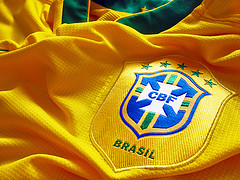 Watching the 2014 world cup semi final match between Brazil and Germany was a joyous and saddening experience, I felt sorry and a sense of embarrassment for Brazil and at the same time excited and impressed by Germany’s performance.

The final result was 7-1 to Germany; I asked was this a display of great service by Germany or a complete thrashing of Brazil? Was the result reflective of the number of players, 7 German players against 1 Brazilian?

What makes a good game?

When two sides are of equal strengths, skills and determination, it’s a may be an entertaining game with high points of anticipation and unpredictability but where one team is much better than the other then it’s a game with a mixture of emotions that float around the two extreme ends of the human spectrum, joy and sadness.

The match was like watching the Harlem Globetrotters, where Germany was on an exhibition drive combining athleticism, theatre and fun.

The big question was, who was better prepared?

Yes that’s an easy answer, but how?

By reviewing the match, no I’m not Alex Ferguson  it was obvious that each player knew their role and how their role was important in moving the ball through the game, eventually placing it in to the Brazilian’s goal (seven times).

Knowing your role on the pitch or in your organisation may just not be enough, it was obvious that they had practiced, practiced and practiced so that it almost appeared that the German team was one person, they had developed the basic building blocks that all great teams have.

The skills set and competencies can be transferred into an work setting, great teams have been compared with great orchestras where each instrument player knows their place, role, when to come in and how hard to play.

The basic building blocks consist of a multitude of disciplines, here are a few I believe work:

When providing a service to customers you need to know what you are doing, not just what next, but following that and then following that.  Where as providing great service is a lot more than what I’ve mentioned, it’s all about understanding what your customers will do following each action you undertake.

I’m looking forward to the final, not just for the pure enjoyment of the game but to see if Germany does truly maintain muscle memory and can predict the play as the ball darts around the pitch.