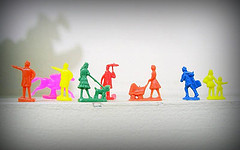 When planning to go on holiday don’t you find the few weeks before becomes an excruciatingly busy time. Is it that either everybody knows you’re not going to be around, so piles on the work or is it a case that your internal clock sets the scene and psychologically applies the pressure. You know you’re not going to be around so you try and wind down, finish things before you leave or even delay it until you come back. Whatever happens it always ends up being a hectic time.

Looking ahead don’t you also find that you end up paying for the the time you take off when you get back to work. Work backs up awaiting your return  – I guess the worst thing is coming back and finding no progress has been made on work you have left to be completed in your absence.

During the week a colleague asked how was my day in court (as a Justice of the Peace, a Magistrate), eager to share a story but too busy – said I let them know later.

I’m happy to share stories with my friends and colleagues that I pickup in court,  although am careful when relaying events – mindfully keeping confidential details – well confidential. I’m always keen to promote the workings of court  to help increase public awareness of the role of magistrates in the criminal and civil justice system.

Anyway more of the story I was intending to share later.

Dealing with issues relating to standardisation and consistency of service delivery was playing on my mind. I once asked David Taylor, author of the Naked Leader and Naked Coach for his advice.

I set the scene, imagine you’re a world-class service provider – all the suppliers you depend on are fully briefed and know exactly what is expected of them and when. Everything you do, from first contact, eliciting and requesting details, actions to follow, checks to make are all documented in procedures and process maps. Your teams are fully briefed, roles and responsibilities have been allocated. Individuals know exactly what to do.

My concern was that issues start arising when I was not there – It’s as if your teams had forgotten what to do, not everything but the important details that provided value-adds to service offerings.

Examples included failure to communicate at key intervals with customers and occasionally not seeking closure when addressing a customer’s request.

David has an excellent insight into what works and what doesn’t, and advised that you should let the team work it out for themselves. Be present, watch and observe what happens – don’t fix it for them, give them guidance and let them work it out themselves.

This was great advice and worked the majority of time. Although in time-sensitive situations where our reputation was at risk – didn’t work.

What would you recommend?

I realised little while ago that the root to this issue is what I have coined as ‘Ritual Behaviour’.

The majority of people are built a certain way – their background, training and the values they carry makes them who they are and particularly how they react to a situation. This becomes default ‘type’ or ritual behaviour for them.

There are two elements of ritual behaviour that really stand-out, one is the ability to reflect over a situation or event and  identify what went well and what needs changing. The second is the complimentary ability to view a situation or event in the eyes of a consumer looking for a clear end-to-end quality of service and fulfilling it.

Years ago you would have employed someone for their specialist skills and train them with customer service and delivery skills. Although with consumers being much more intelligent and demanding the time has come to reverse requirements and focus on recruiting individuals with strong customer service and delivery skills and providing them with specialist skills later.

An interesting model studied is the military one, where new soldiers, during training, are all broken down to the lowest point of existence.  They are taken to hell and back and told how useless they are. Following that they are trained hard and built up to being the toughest, strongest most agile group of individuals in the military, consistently being told they are the best.

Surely we can’t do that, not in the normal 9 to 5 work environment – could we?

Anyway back to the story, an interesting case appeared in court which involved a flat being advertised in an affluent part of London, well under the market rental rate. A group of friends had contacted the landlord who invited them round to view the flat. He then agreed to meet them to sign contracts and take deposits.

At the last minute he apologised for not being able to turn up but said his sister would meet them to take deposits and provide the keys. They meet in a coffee shop around the corner from the flat. Contracts were signed, deposits were taken (thousands) and keys were provided.

When the friends tried to move into the flat, after packing and hiring a van, found none of the keys fitted the front door of flat. They also found the flat actually belong to somebody else. They had lost their deposit and the flat and were homeless.

The landlord and his sister would have got away with it, if it wasn’t down to one of the friends who spotted them in the same coffee shop three months later.

It amazed me the extent individuals go through to get what they want, I wonder if this could be related to ‘ritual behaviour’.