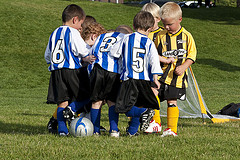 Having a clear view of where you want to be and having great intentions sometimes ends up with issues and delays.

The above may just not be enough, if you’ve ever watched a football match involving two teams of ten year olds – you’ll see what I mean.

They all end up chasing the ball, wherever it goes – It can be quite funny, must be tiring when you are part of it.

Some time ago I heard a counsellor use an analogy involving a group of ten year olds playing football where they were all chasing the ball. The ball indicate an issue that needed resolving and the two teams strategically placed to deal with the issue when it appeared near them.

The point of mentioning this is that we naturally all chase ‘the ball’ – regardless of having a clear view of where we want to be or no matter the extent of how great our intentions are.

The missing element is ensuring that we:

1. Identify the activities, steps and/or hurdles to get us where we want to be and prioritise them into a sequence with appropriate timescales, and

2. Co-ordinate individuals, based on their strengths, into roles and responsibilities and then into a rota of the above activities.

Without a clear understanding of ‘who does what’ (roles) and ‘who is accountable for doing what’ (responsibilities) we all end up chasing the ball.

Back to the analogy, imagine what happens when you introduce more balls into the game.

Most issues and problems usually come in pairs  – as soon as you introduce more balls – you end up with different groups chasing different  balls, occasionally running into each other while swapping balls between each other.

What remains constant is the increase in speed and noise, with the confusion of chasing the correct ball.

This is not only common on the football pitch but also in life and at work, where only the bystanders can see what is happening.

We have all been involved with conflicting priorities, a clear and robust planning and prioritising scheme in place will prevent you chasing more than one ball and in some case the wrong one.